In this brief guide, we will discuss the phenomenon of Submechanophobia, and look at other rare phobias as well. We will also look at some related subjects that come up often in relation to Submechanophobia.

Submechanophobia is defined as the fear of partially or fully submerged man-made objects, and this phobia must not be confused with mechanophobia which is just a fear of machines.

Submechanophobia also has many online forums and communities devoted to it, likely because of the bizarre nature of this phobia that most people find hard to understand and difficult to analyze.

Submechanophobia also needs to be understood properly and distinguished from just being scare of the world underwater, which is known as Thalassophobia, or a fear of drowning, which may be known as Aquaphobia.

The concept of man-made objects or machines is what gives the typical submechanophobics the trademark fear that defines the phobia for them, and therefore it needs to be differentiated from other conditions so as to avoid any confusion.

Generally speaking there can be many causes of submechanophobia and usually, there are three main theoretical principles that might apply to submechanophobia development, which may be Biological, Cognitive/Behavioral, and Psychoanalytic or Psychodynamic.

To begin with, it is usually very hard to define if someone has submechanophobia, as his phobia does not cause any impairment in daily life or functioning like social phobia or claustrophobia might.

The three main theories of phobias are Biological, Cognitive/Behavioral, and Psychoanalytic, out of which only cognitive and behavioral or psychodynamic/psychoanalytic might apply to Submechanophobia, and therefore only those are discussed here.

The cognitive or behavioral theories of phobia discuss how the fear may have been learned, for instance, a person that comes to be very scared of snakes or reptiles, in general, may have learned early on that it is in their best interest to stay away from them at any cost, which then becomes an internalized thing that they cannot help anymore.

When talking about the learning theories affecting the development of phobias, it is important to remember that the object of phobia is rarely the reason for the primary anxiety or the first fear that got reinforced in the individual.

In the instance of snakes, therefore, it may be said that the person starts being phobic towards all things that look like snakes or they may have an unnecessary fear of all reptiles just because their parents constantly rewarded them for avoiding snakes.

In the case of Submechanophobia, the fear may initially develop in the form of fear of drowning or fear of water in general, or knowing that the ocean or underwater world is so vast that one could get lost in it, and then seeing man-made objects inside the water may become a big fear as well.

The psychoanalytic theory suggests that phobias may result from conflict between id and superego, and the defense mechanisms that may be used most commonly in phobic experiences are Regression or sublimation, both of which involve a degree of suppressing the anxiety-provoking experience and either converting that into something else or just leaving it buried deep in the subconscious.

In the case of submechanophobia, the psychoanalytic theory might say that the person experiences something adverse related to water or just has a fear of the environment around them crumbling, which then gets converted into a general fear of man-made objects being underwater, and they may start being afraid of this situation even if they are just seeing it.

Sublimation may take place in the case of Submechanophobia in the form of the person who is afraid also being deeply fascinated by the same objects that cause their anxiety, which may be the reason behind them wanting to look for things that display submechanophobia.

The subreddit on submechanophobia may be a good example of reaction formation towards this fear as well, as it is devoted to finding footage and images of things that may trigger submechanophobia.

Another psychoanalytic perspective on why submechanophobia might occur is because the ocean, in general, is a place that is no familiar to people, and when things that they relate to humanity are seen submerged in this relatively dangerous and unknown place, it may sometimes be seen as a gateway of sorts, to a world that the individual would much rather not explore.

A lot of people have reported feeling their submechanophobia get triggered after looking at Disney’s underwater display of animatronics, as this display fulfills two of the main fears of Submechanophobia, which are submergence underwater and man-made objects.

Animatronics are considered creepy by many people even when they have not submerged underwater and therefore the Disney world display of robots can be rather disturbing.

There is also a youtube video that a lot of people with submechanophobia find rather interesting and seem to flock towards, which may be evident in the number of views that this video has.

A Youtube user shares their experiences regarding the video and their submechanophobia in the following review:

“ok so my fear is really just all the stuff under the water that is used to make them move so all the machines and whatever is down there for example look up the jaw ride drained and all the stuff down there is scary to me so imagine falling in that water with all that stuff and to make things worse, for example, the jaw ride the sharks pop out of the word and what if you were so unlucky that you were right where it pops out i can imagine and if you sunk to the bottom with all those machines i-”

“I watched this and I’m like “what a weird phobia”

And then I realized I don’t like seeing underwater animatronics.

It makes me uncomfortable because I hate thinking about electronics underwater, especially the muck water.”

Phobia is defined as an irrational and uncontrollable fear of an object or situation that poses no immediate or potential threat to the individual but still causes an intense fear response in them.

According to the MayoClinic website, a phobia may cause the following reactions in individuals when they are around the object that causes fear or in a feared situation:

Here is a list of some rare phobias and their meaning:

There is a rather large Reddit community that is pretty much devoted to the images and videos of submechanophobia, and the community has about 324k members, which shows how far-reaching this phobia is.

Here are some comments from users of the Submechanophobia subreddit:

“I hate that so much, its underwater confined spaces, especially with machinery in it that makes me just, nope”

“This one does it for me. It brings back memories of an old abandoned water treatment facility. The pump house was flooded and looked like this. I use to go there as an elementary school kid.”

“For me, it’s a combination of a lot of things- I have thalassaphobia too so it’s probably mostly to do with the water, to be honest. The idea of swimming above a shipwreck makes me feel sick… anyone else?”

“Other for me. I don’t know what it is, but imagine the feeling of stepping on (or touching with your hands) anything mechanical, wooden, plastic, etc. underwater gives me this feeling I can’t describe. It grosses and weirds me out to the extent that if I ever do go in the water, I have to wear shoes of some sort. I just hate thinking of touching man-made objects in the water and feeling the algae, or whatever has grown on them.”

“Mechanical objects, mostly those with moving parts as well as things with water intakes capable of injesting you to them or into them, mostly dams fall into that category. But I’m not afraid to the point where I’ll refuse to go near them, just that they make me uneasy before my current career choice I was going to be a commercial diver.”

“Typically it’s active machines that freak me out. What scares me is the lack of control in, near, or around the machines while being in the water.

For example, tourist sub is so slow-moving it does not seem to me like it poses a threat.

Ship propellers 1. make a lot of noise, 2. will kill you if it smacks into you, 3. the ship is large and heavy so if it rolls in a wave and comes down on you while under it, it could kill/disable you.”

Here are some images that fit into the fear of submerged man-made objects that may trigger submechanophobia (if you have this condition please don’t go through the images as it may cause significant unease).

This submechanophobia image shows a man-made structure of wood partially submerged in water. 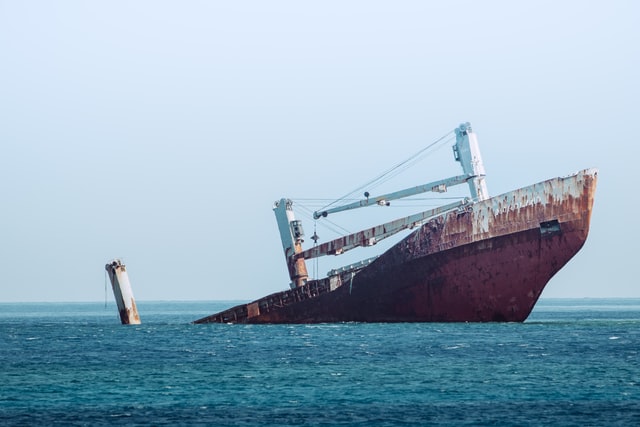 This submechanophobia image shows what many individuals with this phobia are particularly scared of, which is ships in the water, either drawing or completely submerged.

This submechanophobia image also shows something many people find very stressful, which is the propellers of a ship under the water.

The world of phobias is diverse and varied, and some theorists think that the more we progress as a society, the more we have to be afraid of, which stands true in the case of phobias like Submechanophobia.

There are other unusual phobias such as fruit phobia, fear of spiders and many many more.

If you have any questions or comments about Submechanophobia or other rare phobias, please feel free to reach out to us.

Submechanophobia is the fear of partially or fully submerged man-made objects, such as ships, propellers, cars, and so on, and it may also include many possible subtypes.

Submechanophobia may be considered as being related to a variety of basic fears surrounding bodies of water.

Submechanophobia might be caused by anything from environmental factors like running into some water related problems at some point and becoming afraid of everything related to water from that point on, or a deeper problem like being afraid of seeing the world around the person in a rotting or sinister way underwater.

Yes, Submechanophobia, which is a fear of man-made objects that are submerged under water, is very real, though it may be somewhat rare and it is not very easy to notice as it does not cause any significant impairments to functioning.

Vetpro Stress and Anxiety: Does it Work? (A guide)

Will my doctor give me a sick note for anxiety? (yes or no)

State Trait Anxiety Inventory (Everything you need to know)