A feelings wheel is a diagrammatic representation of all the core emotions as well as the secondary ones they are related to, and it is considered to be an aid in helping people figure out what they are feeling and express themselves better.

There are an estimated 34,000 emotions in a human being’s repertoire, which means that there are emotions that our brains are capable of that we don’t even know about, and can’t even express.

Researchers like Dr. Robert Plutchik and Dr. Gloria Willcox have done some pioneering work in the field of theories of emotions, and they have created emotion wheels that many places use.

There are also specific feelings wheels like that of the Junto Institute which is a company that seeks to help people grow and develop their businesses and they use the feelings and emotion wheel as a means of helping people better their emotional intelligence.

The idea behind Feelings wheels is that if humans have so many emotions, how can one navigate through them, especially if they are not feeling their best, like if they are stressed or angry, or even afraid?

American psychologist Dr. Robert Plutchik was the first to propose the need for something like a feelings wheel to get some clarity on one’s emotions, because according to him, there was an evolutionary and biological need for many of the emotions, and they were important to identify correctly for the sake of our sanity.

Dr. Plutchik talked about eight primary emotions that he said were the foundation for all others as well as the trigger for many of the behaviors that we engage in all the time, and these emotions were joy, sadness, acceptance, disgust, fear, anger, surprise and anticipation.

The feelings wheel does not seek to identify or put people in touch with all 34,000 emotions, but it does seek to help people at least identify the primary emotions and act accordingly so that we are able to better our everyday behavior.

The feelings wheel is especially useful when we are feeling particularly intense emotions and we are not in a state to recognize or pay attention with all of ur awareness, in which case we may find that our mind is not able to remain objective because it may be reacting or operating from an impulsive “fight or flight” response.

In such cases the feelings wheel may be very useful as it may help people pinpoint what they are feeling with some degree of accuracy, which may in turn help others to help them.

The most dominant use of feelings wheels is with children, however, because of their even more limited capacity for the expression of emotions.

Children may show emotion in their behavior frequently, but these may have different underlying causes that they may not be able to describe in words, like a sad child is more likely to act out than an angry child, and the adult may never find out that the child is sad.

Another area where feelings wheel come in particularly handy is with individuals suffering from disorders that limit their expression of emotions, like Autism Spectrum disorders or even psychosis, and in these cases the feelings wheel serves as a good tool to get an idea of their emotional states.

Here is a PDF of the basic feelings wheel by the Gottman Institute.

The wheel of emotions is based on Dr. Robert Plutchik’s theory of emotions, and it contains 8 main emotions, that are responsible for basic behavioral actions of the individual.

Dr. Plutchik has described a complex system of emotions that also defines and makes emotional intelligence easier to understand, and it has many components.

Plutchik identified eight primary emotions which according to him served as basis for all others, and he has grouped these emotions into polar opposites to provide us with groups of 4, like so:

Plutchik’s emotions theory stems has its inspiration in the ten factors given below:

The midbrain, or the limbic system of a human is similar to that of other mammals, and according to the theories of emotion given by various different researchers, it has been seen that many animals and humans experience the same basic emotions across time.

In fact, there has even been research where it has been seen that rats laugh like people when they are tickled.

Evolutionary History is another key factor in the theories of emotion, and it seeks to define how the presence of emotions evolved and what purpose they serve, and according to most researchers emotions have a high evolutionary value, and they may have existed long before there were apes or humans in other types of animals that are usually considered primitive.

Why did the emotions evolve in the first place? The third point of any theory of emotion will state that emotions have a survival value, and this may even be the most influential role of emotions, to help us survive.

Another important characteristic of emotions is that they have Prototype Patterns, and there may be common identifiable patterns and elements in each emotion.

According to most theories of emotions, there are Basic Emotions namely: trust, fear, surprise, sadness, disgust, anger, anticipation and joy.

After looking at the basic emotions, one needs to look at their Combinations, sort of like mixing colors, which is the primary postulate behind the feelings wheel, no matter who has given it.

For example, adding up various primary emotions will produce new ones such as: love = (joy+ trust), guilt = (joy + fear), and delight = (joy + surprise).

Another trait of emotions is that they are hypothetical constructs, and they are ideas or concepts that may have behavioral manifestations but they may not go beyond that.

A common trait of everything in the universe is that everything exists in a duality, there are always opposites to something, and the same applies to emotions, and each one has its polar opposite like:

However, where there is the opposite, there is also Similarity, where we might find that many emotions are also related, which may be seen in the degree of similarity between them.

This degree of similarity may often also change in intensity, which is something that may frequently be assessed through the feelings wheel, and the intensity may vary from very strong to not so much, and this is what sometimes may also produce the diverse amount of emotions we can feel, instead of just feeling different emotions.

Here is a link to Dr. Plutchik’s Wheel of Emotions.

How to use the Plutchik’s Wheel of Emotions (PDF)

To use the Plutchik’s wheel of emotions, one might get a printed version of the wheel or they may make their own if they feel up to it, and they can use it in a two-dimensional circle or three-dimensional ellipse form.

When using the feelings wheel in a two-dimensional circle manner, one might be able to dive into the emotion wheel straight away and they may find that it helps them discover what primary emotions they are feeling, as well as how emotions combine to create secondary emotions like awe, remorse, aggression, optimism.

The two-dimensional approach may not necessarily give the individual the necessary information about how these emotions are affecting their behavior and it may not express the intensity, but it may still be good for individuals who are struggling to express their emotion.

In the three-dimensional ellipse form, the individual can view the emotional intensity of the primary and secondary emotions and try to get some information about what behaviors they elicit in the person.

Dr. Gloria Willcox’s feeling wheel is another very commonly used feelings wheel in therapy and in other circumstances, and it has a similar concept as Dr. Robert Plutchik, but the key difference is that her feelings wheel may not necessarily be about the behavior, but just used as an aid to recognize, talk about, and express one’s feelings.

Here are some of Dr. Gloria Willcox’s Feeling Wheel PDFs:

The Feeling Wheel by Calm

Feeling wheels with faces may mostly be used for children in school, preschool or those suffering from developmental disorders like autism.

Here are some PDFs of Feelings wheels with faces:

Feeling Wheel With Faces for Children 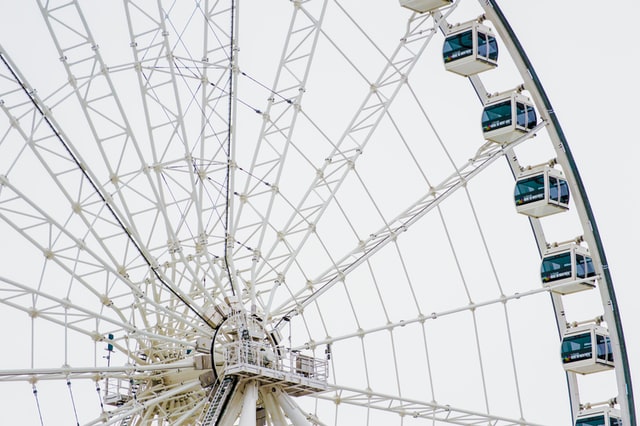 A Feeling wheel is very useful for individuals who may have difficulty figuring out what it is they are feeling and it may come in especially handy when something is dealing with a thought diary or some other psychotherapeutic technique that involves an insight into one’s feelings.

The feelings wheel was created with the intent of getting people more in touch with both negative and positive emotions so they could make the transition from negative to positive smoothly and without hassle.

If you have any questions or comments about the Feelings Wheel, please feel free to reach out to us at any time.

What is the feeling wheel?

The Feeling Wheel is a tool to aid people in learning to recognize and communicate about their feelings and emotions, and it is aimed at helping individuals recognize and fix negative emotions.

The feeling wheel consists of an inner circle with 5 sectors with the core feelings, or primary feelings, and two outer concentric circles which consists of secondary feelings or those that arise out of the primary ones.

Some secondary feelings may include feelings like mad, sad, scared, joyful, powerful, and peaceful.

What are the 8 core emotions?

The 8 core emotions are anger, fear, sadness, disgust, surprise, anticipation, trust, and joy, and these were so named by psychologist and researcher Dr. Robert Plutchik, who says that the primary nature of these emotions may often be the trigger of behaviour with high survival value, which is why they may be considered core emotions as opposed to derived ones.

He said that these are the core emotions because they may underlie some major life sustainability related behaviors such as the way fear inspires the fight-or-flight response.

How do you make a feeling wheel?

To make a feeling wheel you can get the image from the internet in a good quality, get some paper or cardstock, cut out a circle and then you can either draw faces with different emotions or you can get a print out of the wheel and stick it on the wheel.

You can also cut out a little arrow and attach it with a fastener to indicate the emotion at any given time.

What are the 5 core emotions?

The 5 core emotions that have always been agreed on: joy, fear, sadness, disgust and anger.

These 5 core emotions are different from the 8 core emotions described by Robert Plutchik, who based his theory more on how those emotions may affect behavior.

What are the 10 basic emotions?

The 10 basic emotions are as follows: