Dermatillomania refers to the compulsive picking of skin to the point that it causes harm to the individual, but they are still not able to stop, and the habit might get worse in periods of stress or anxiety or any heightened emotional states.

Dermatillomania is also known as excoriation or chronic skin picking and in all the classifications for mental disorders it is included under Obsessive compulsive disorder, and it is considered to be related to the class of anxiety disorders.

The essential feature of dermatillomania is recurrent picking at one’s own skin and usually it has been seen that the most commonly picked sites are the face, arms, and hands, but in more severe cases, some individuals may pick the skin in multiple body sites.

In dermatillomania a primary feature is that the person may pick at healthy skin to begin with, or even minor or painless skin irregularities, at lesions such as pimples or calluses, and eventually it may get to a point where they may start picking at scabs from previous picking.

In most cases of dermatillomania the person tends to pick with their fingernails, although in some cases they may also use tweezers, pins, or other objects.

Dermatillomania does not just consist of skin picking per se, and sometimes there may also be added skin rubbing, squeezing, lancing, and biting.

The key thing that separated dermatillomania from just general anxious skin-picking behavior is that these people are likely to spend significant amounts of time on their picking behavior, and this may even happen several hours per day, and such skin picking may endure for months or years before they even notice the habit.

Someone with dermatillomania may often have very obviously marked hands, arms or legs, or wherever they pick the skin, and they may not notice that they are doing something obviously harmful to their skin because they usually do it when they are stressed out.

In most cases, efforts to stop the behavior may end in anxiety or negative emotional states, which may abate as soon as the person starts the picking again, reinforcing the habit even more. 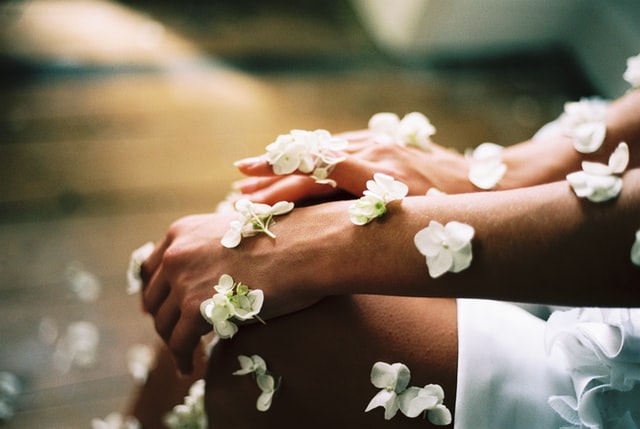 While the chief symptom of dermatillomania is obviously skin picking, the DSM 5 criteria for this disorder is given below:

B. Repeated attempts to decrease or stop skin picking.

C. The skin picking causes clinically significant distress or impairment in social, occupational, or other important areas of functioning.

D. The skin picking is not attributable to the physiological effects of a substance or another medical condition (e.g., scabies).

E. The skin picking is not better explained by symptoms of another mental disorder (e.g., delusions or tactile hallucinations in a psychotic disorder, attempts to improve a perceived defect or flaw in appearance in body dysmorphic disorder, stereotypies in stereotypic movement disorder, or intention to harm oneself in nonsuicidal self-physical damage).”

The causes of dermatillomania may include psychological or cognitive, although in some cases it has been seen that a genetic predisposition to obsessive compulsive disorder may also cause this issue.

The causes for dermatillomania include:

The causes of dermatillomania may also include conditioning, though this may be more of a cause for the persistence of the disorder rather than its inception.

In conditioning, the person picking their skin may be doing it unintentionally or unconsciously to start with, but eventually the brain starts to recognize the stress relieving capacity of the habit, which starts making it somewhat pleasing or helpful, and this makes the person experience a reduction in the negative state they were experiencing.

When they try to stop because they are feeling shame or guilt, the anxiety they may have been experiencing comes back, but it is worse this time because there is added anxiety at the pleasing habit not being present.

This makes the person pick their skin again and it becomes much more reinforced compared to previously, which makes it that much harder for the person to stop it the next time.

Dermatillomania is a typical habit based problem that may respond very well to therapy given its highly learned nature.

The psychodynamic causes of dermatillomania may suggest that the problem occurs due to the hatred of the person towards themselves or perhaps a weak ego and either a too strong superego that is punishing the person for breaking some internal rule, or a too strong Id that is not seeing beyond the temporary relief that the picking is providing and is hence continuing the behavior.

How to Stop Dermatillomania

To stop dermatillomania you may try the following tips:

Dermatillomania is a habit and as a disorder it is extremely pliable to psychotherapy, particularly behavior therapy and Habit Reversal Techniques.

Habit Reversal is typically used for picking related problems like dermatillomania or trichotillomania, or even tic disorders.

In Habit reversal, the therapist does two things, the first is to assess the extent of the problematic behavior and discuss it with the patient, and second is trying to substitute that behavior with another more healthy behavior.

You can also try to keep your hands busy, which you may do by trying to try squeezing a soft stress ball or putting on gloves.

It can feel extremely hurtful to have a disorder like dermatillomania and not have anyone to talk to about it that understands what you are going through, but thankfully there are many online forums like the Dermatillomania Reddit community where people come together to discuss the problem and support each other through it.

Here are some statements from people on the dermatillomania subreddit:

“I started using neosporin 3 days ago and I would say my picking has dropped at least 75%.

Idk if it’s the gooey that I dont want on my fingers or that it’s a physical reminder, but it’s been working for me 🙂 $4 at walmart.”

“Careful putting neosporin on large areas as some people will develop a rash. Large quantities are not recommended.”

“used to spend countless hours pulling my armpit hairs with tweezers. Wearing a shirt with sleeves helps. I also got an epilator. It’s satisfying to see the hair completely gone (root and all), and is as quick as shaving. Plus, the hair doesnt grow back as quickly, giving me time away from the habit.”

“It started out with scabs. I have scars all over my legs and arms from picking at bug bites and scrapes as a kid, can still remember my parents scolding me while I stood there with bloody limbs and fingers.

Then the acne and anxiety came. Four long years of cystic acne turned into a lifetime of hyperpigmentation and scars. Accutane saved me from myself thank god, but sometimes I find myself wishing I had more pimples to pop and dig at. That’s how strong the compulsions are.

The anxiety never went away, manifested instead as relentless tearing of my cuticles and hangnails. Reaching into my bag, doing the dishes or taking a shower all became excruciating, bloody ordeals. At one point my thumbprint stopped working on my phone due to the carnage.”

“At my last psych appointment I mentioned issues with picking, and she’s like oh I’m glad you said that, because these meds should help with anxiety too and help that.

And I was just thinking to myself, that’s not how it works… My picking is not an anxiety problem. Though yes, I also pick more when I’m stressed or anxious. But it’s mostly absent-minded, habit, and not liking the feeling/appearance of my skin.”

People have always told me to stop picking, or asked me if my anxiety is bad and that’s the reason I’m picking. But in reality I do it just because I can and want too. It makes me feel more ashamed because people THINK there’s a reason but there’s not for me. And when I tell people its just something I do, they would report me to the office at school and my counselor would use her “I’m trying to help you, don’t finish off yourself” voice. I’ve just started to not tell people a reason or just lie and say it’s because I’m anxious. I feel ashamed and disgusting for picking and not having a reason. And people assuming a reason just makes it worse.”

Dermatillomania, or excoriation, is a very disturbing and disruptive condition that bothers people a lot, but because it is so compulsive the person may not be able to stop either, which may often bring them even more discomfort.

As with other mental health related conditions, dermatillomania is very receptive to treatment, and it is always a good idea to seek it when someone is suffering so much due to a disorder like this.

If you have any further questions or comments about dermatillomania, you can reach out to us at any time.

How do you stop Dermatillomania?

To stop dermatillomania you may seek treatment, and while you do so you can also try to keep your hands busy, which you may do by trying to try squeezing a soft ball or putting on gloves.

You should also try to identify when and where you most commonly pick your skin and try to avoid these triggers.

Another thing you can try to stop dermatillomania is try to resist for longer and longer each time you feel the urge to pick, or consciously stop yourself when you start picking your skin.

Do I have Dermatillomania?

You may have dermatillomania if you find that you habitually and excessively, or compulsively, pick, scratch, gouge or squeeze at otherwise healthy skin.

Someone with dermatillomania may usually pick at the skin on their face and lips, but it can be any area of the body, such as the hands, scalp or arms, and if you think that you do this too, you might in fact have this disorder.

Yes, picking is a sign of anxiety, whether that is skin picking or hair picking, it has been seen that people often engage in any sort of picking behavior as an attempt to cope with negative emotions like anxiety, sadness, anger and when they get some relief as a response this habit is strengthened and keeps happening again and again.

However even though the habit provides some relief, it also causes pain, shame or guilt to the individual.

What are the symptoms of Dermatillomania?

The symptoms of Dermatillomania are:

Is Dermatillomania a form of OCD?

Yes, dermatillomania, or excoriation disorder is a mental illness which is considered to be a form of obsessive-compulsive disorder.

Dermatillomania is also known as Chronic Skin Picking, and often there don’t even need to be any other symptoms but the skin picking for it to be diagnosed, and it may usually be considered to be a sign of compulsions in obsessive compulsive disorder.